We recently celebrated our hometown’s yearly festival.  It’s a fun time to hang out with family, see old friends, and really for us is a 2nd official start to summer – after Memorial Day.

This year, Lulu was old enough to experience the festival, and experience she did!  And don’t worry, Linc had his fair share of fun, including a photo op with our state Governor, maybe a potential politician in the making?

While there is a lot of fun memories this year, including riding rides for the first time, eating funnel cakes, and just being around all the new sights and sounds there is one memory that really stands out.

Mamas, how do you ask for help? Do you find it hard or easy to accept help? Asking for help is so hard for me! I see it as a failure and I struggle with seeing failures as learning opportunities. If you are confident in asking for and receiving help, I am so envious, please tell me how you got there!

As I became a mama, and even more so when I became a mama to 2 beautiful babies, more and more people are offering up help. In some ways, it’s ahh amazing! It makes me feel part of this beautiful tribe that is helping mamas raise each other up. And I’m working to be grateful and accepting of that help. And in return do the same to the mama’s I see around me that could use a helping hand, a smile, and especially a seat on the train! 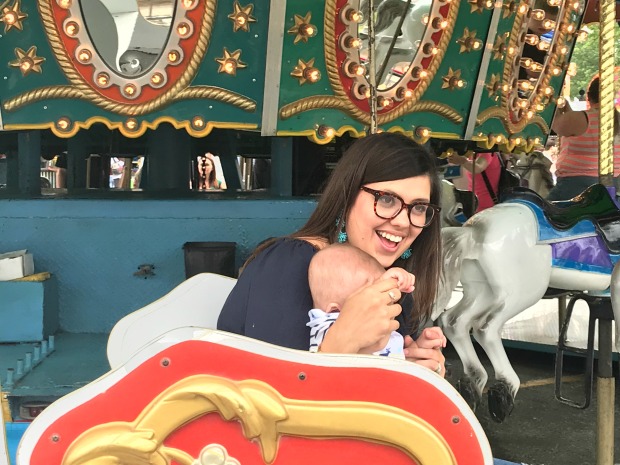 As current city dwellers, and me personally who doesn’t have a car in the city, we walk or take public transportation everywhere. Most of the time, that’s no big deal. But sometimes the stroller gets stuck or won’t turn as fast as I want. Sometimes I try to hold more groceries than I can handle through Target or Trader Joe’s. There’s no way I can push a cart and a double stroller. If you have a mom hack to make it work, please let me know! Help to carry a watermelon, I can take and appreciate more than you know. And yes someone did that for me recently, and yes the first thing that comes to mind when I think watermelon is Dirty Dancing. #icarriedawatermelon. Sometimes the alternative is to throw it under the stroller to finish your shopping- but that can get you some funny looks! Is she really so desperate that she had to steal a $5 watermelon?!?!
Recently, at this beloved festival, circling all about Friendship, I accepted help and I was so ashamed. I took the kids by myself to a parade in our hometown. It was hot. 95 degrees at noon hot.  We didn’t get there early enough to find a place in the shade. In my defense, I think its crazy that you have to get to a parade an hour plus early to get a decent seat.  Who has time for that? If you do, that’s amazing, I’m a little bit jealous, but I do not.  I’m lucky if I’m on time.  I only had a single stroller and an Ergo. I had a bag-chair, a diaper bag, a drink for me (gotta have my Spark everywhere I go), water for Lulu, lunch for Lulu and me, and a baby boy that wanted to sleep.

So I take everything out of the car, get everything ready, and as I move Lulu from the car seat to the stroller I discovered she lost a shoe somewhere. So a baby girl who wanted to walk, get out of the stroller and explore, but couldn’t because I was the mom who couldn’t keep 2 shoes together. It was hot, both kids were upset, but I felt I had to be there to support their grandparents who were in the parade.  So there we were and there was where we were going to stay.
Mom guilt is real, And I was feeling it. I was awkward and trying hard to hide it. After about 15 minutes, and still, 5-10 minutes before the parade would get to us, a woman crossed the street and insisted I go with her where there was shade. She would make room, we could sit in front of her. I was mortified!
Someone noticed me. She meant well. She was trying to help me. But it meant I had to find a way to pick up my little ecosystem I had carefully laid out, cross the street, with 2 kids and get resettled in. All while this lady watched/helped and her friends across the street watching. I couldn’t get any smaller. It was physically impossible.
Eventually, with a little help and a little-spilled Spark, we made it across the street.  In the end, this woman was a saving grace. She helped me gather and move my stuff, she held Linc so I could focus on Lulu.  She got to practice being a grandma before her daughter had her baby later this year.  Her husband and friends were incredibly kind.  I  didn’t need to feel ashamed, but the awkwardness never went away. I still tried to make the best of it, but accepting help was hard. While we had fun at the festival, and documented much of the fun the previous day,  I have only one picture from the parade and it’s Lulu with her first sucker.  She loved it by the way.

One thought on “Accepting Help”